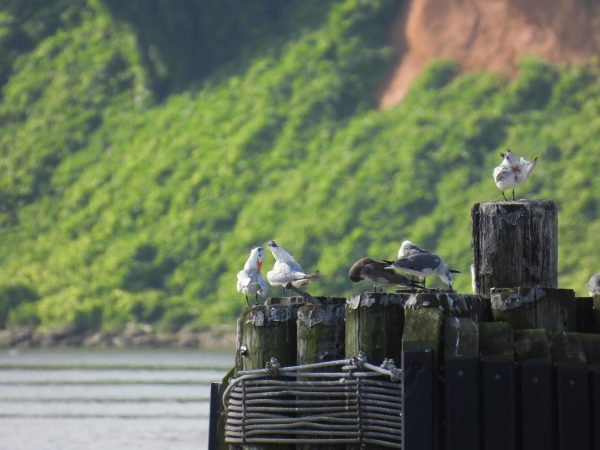 Welcome to the August update in our monthly series highlighting the Hampton Roads Bridge-Tunnel Seabird Colony! Compared to the flurry of activity that was banding chicks at Ft. Wool (if you missed it – here’s a link to last month’s post and behind the scenes video!), August is a month that’s tinged more bittersweet. The sandy parade ground becomes more visible and the crèche shrinks to almost nothing as the intrepid birds find their wings. The cacophony of cackling calls gets a little quieter. It’s a scene that’s triumphant, wistful, and inspiring. Fledgling departure from Ft. Wool and the barges starts as a trickle, then a stream, and pretty soon every elevated perch along our coastal waterways stands a chance at being occupied by one of these fledglings.

We visited the nesting ground again in August to check out the colony and conduct an intensive search and collection effort for any banded adult or chick carcasses. Although the main flush of activity has passed and the royal tern crèche has shrunk precipitously, there were still some nests and chicks on Ft. Wool and the barges. Some of these may be the product of late arrivals to the colony, while others may be the result of re-nesting attempts that occur when an initial nest fails and the adults attempt to nest again. These later nesting efforts result in chicks that are developmentally just a little behind the main crèche. In addition to the 100 or so royal terns that remained on Ft. Wool, there were also a small number of common terns and black skimmers that had yet to fledge from the barges.

Contrasting images from May (left) and August (right)of seabird occupancy at Ft. Wool. 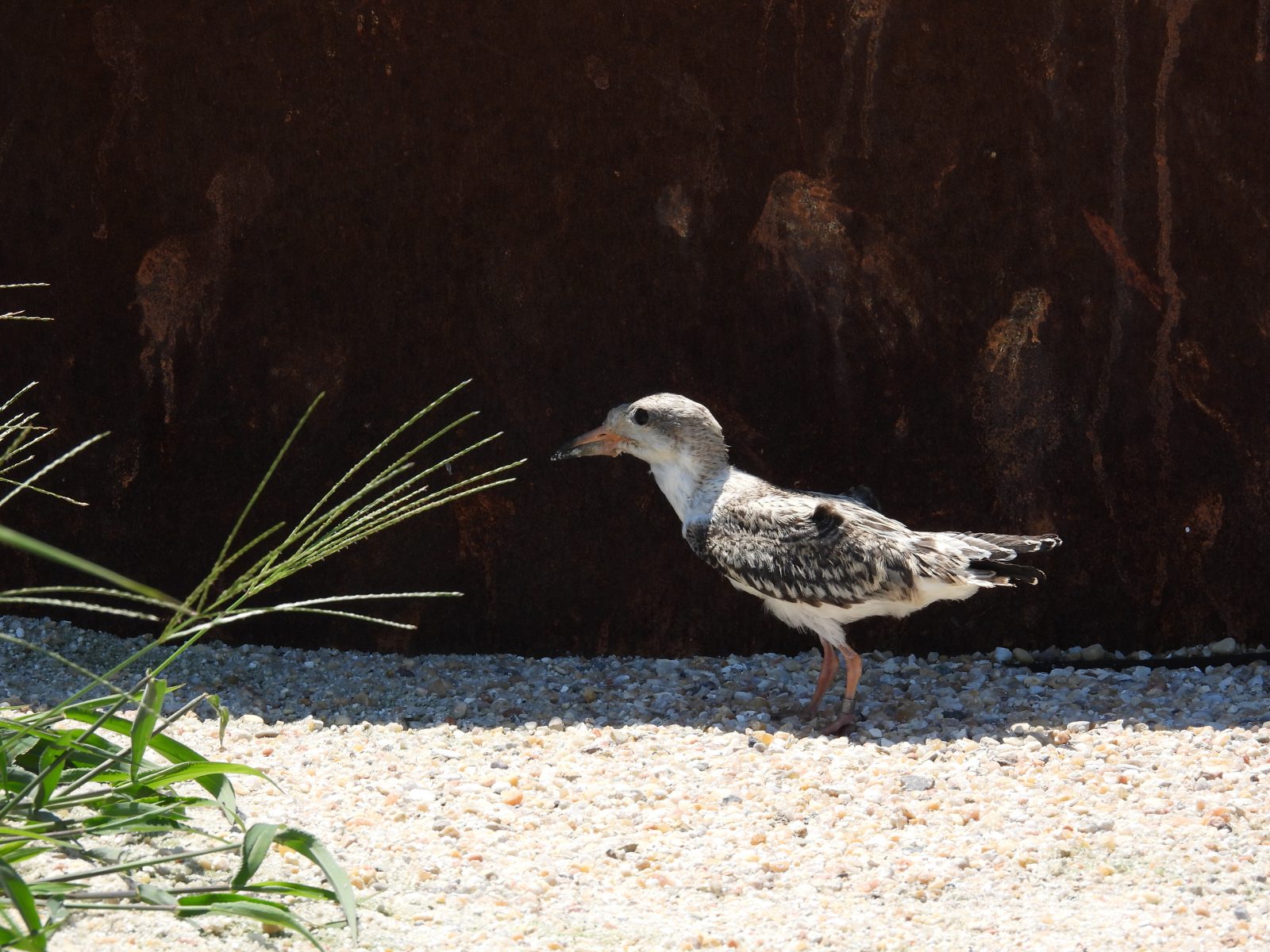 Black skimmer chick observed during our survey that had yet to fledge. 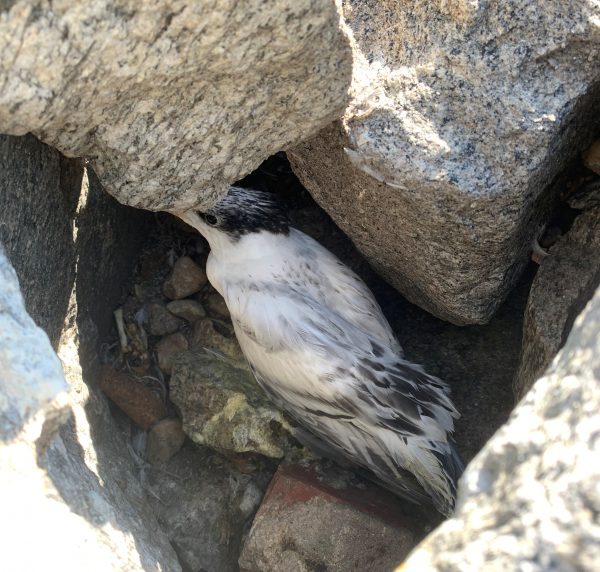 While on Ft. Wool, we also saw a handful of tern chicks taking refuge in the riprap around the island, bathing in the shade and cooler temps from within the crevices. This is a prime example of the hard knock life of a seabird: open nesting may have its advantages (that we’ve explained in previous posts), but there are trade-offs, and the availability of shelter or cover can be a huge component in determining if chicks make it to fledging or not.

Island living really isn’t all it’s cracked up to be. Life is hard for seabirds, and that is especially true for juveniles. Exposure to the elements, predation risks, migration stress experienced by fledglings…the list goes on and on. While there may be safety in numbers, there is always going to be some level of accompanying risk. Much like the old adage: it takes money to make money, it takes a lot of seabirds to make more seabirds and losses are inevitable.

We count banded bird mortalities (i.e. dead birds) to obtain on-site survival estimates. While it may not be as gratifying as re-sighting a banded bird, these mortality counts are an equally important piece of the overall biological puzzle. During our sweep of the nesting grounds, we counted 60 banded carcasses on Ft. Wool and 32 on the barges. Although the remains of these 92 banded seabirds may seem like a lot, this isn’t an outrageous number relative to the thousands of other banded chicks that successfully fledged from the site this year.

Left: DWR staff gather at the Ft. Wool dock to discuss their sampling strategy. Center: A deceased common tern chick found atop one of the barges. This chick’s bands were collected during our mortality survey. Right: DWR staff in the process of surveying the Ft. Wool parade ground for carcasses.

Because it can’t all be seabirds and sunshine, this month’s post may feel a tad gloomier than others, but that’s simply the nature of nature. And, let’s not gloss over the good news that we now have observations of banded Ft. Wool fledglings pouring in from all over coastal Virginia! They’ve been spotted in Virginia Beach, Cape Charles and Wachapreague among dozens of other locations along Virginia’s coastal waterways. In fact, I even spotted several earlier this week at the Jamestown-Scotland Ferry (approximately 30 miles as the crow flies from Ft. Wool) on my way to visit Hog Island Wildlife Management Area. 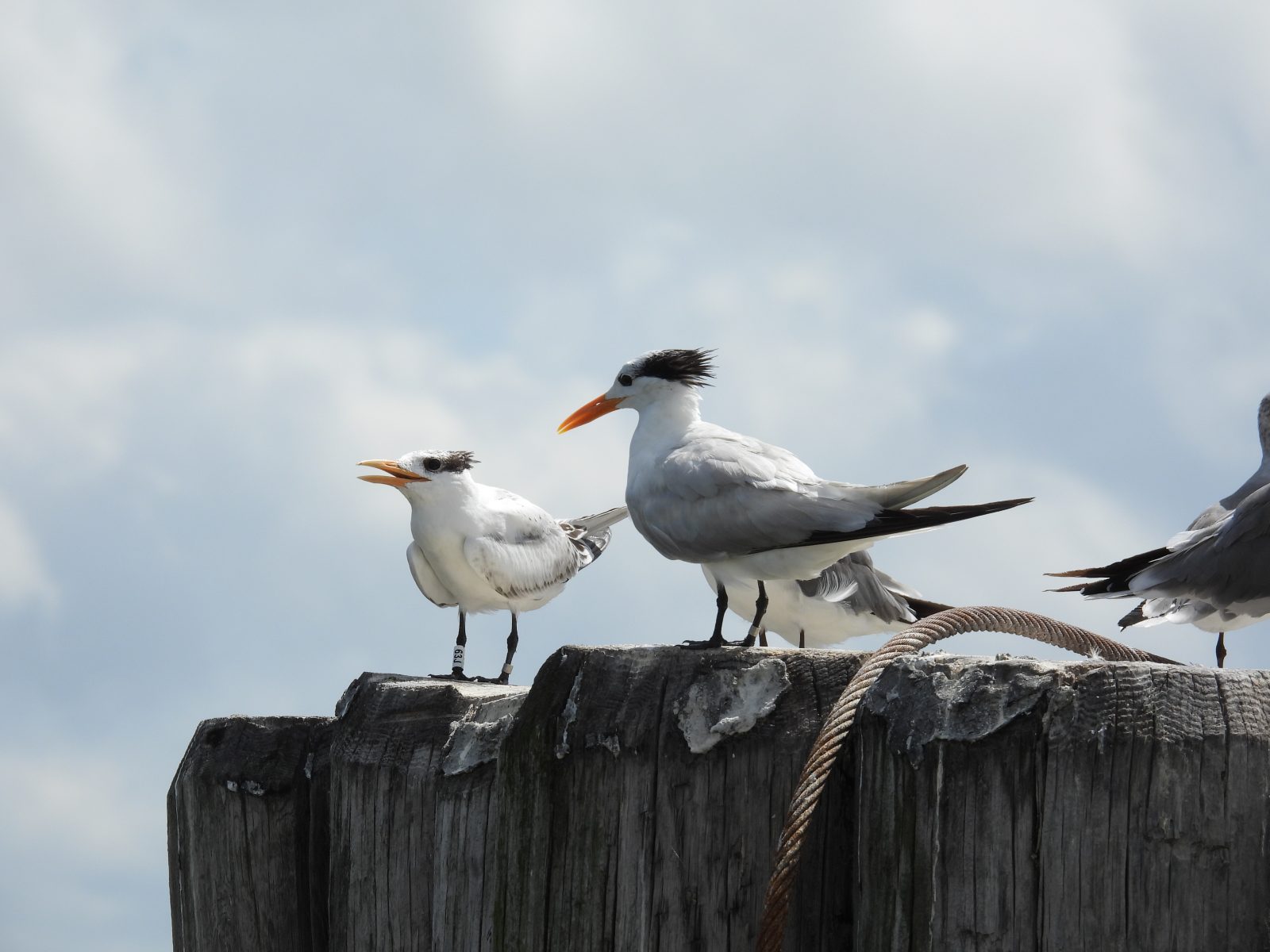 A 2021-banded royal tern fledgling (left) perches on a piling at the Scotland side of the Jamestown-Scotland Ferry, which is approximately 30 miles, as the crow flies, from Ft. Wool. One of the parents (right) stands with it and was observed feeding this fledgling just before this photo was taken.

In addition to observations of 2021 fledglings in Virginia, we’re also receiving reports of these birds from other states. At the time of this writing, more than 25 royal tern fledglings banded last month have been spotted in New Jersey, New York, Delaware, and Maryland. Meanwhile, we’ve also received two reports of sandwich tern fledglings observed in North Carolina. So if you want to see a Ft. Wool or barge fledgling, now is definitely the time to get those binoculars out and start scanning pilings, docks, jetties, and other similar structures on the water. If you want to increase your chances, don’t forget to review our compilation of the 20 top places to see seabirds in Virginia. And, if you do see one of these banded birds, please submit your observation via our online reporting form, linked here!

Seabirds may migrate, but we’ll still be here next month for the final update in our Ft. Wool seabird series. We’re planning on bringing you preliminary breeding population estimates for the season, updates on long-term plans for the colony at Ft. Wool and the barges, and wrap up what has been an exciting and rewarding journey from start to finish. We hope you’ll join us next month for those updates as well as a look at what life is like beyond the crèche! 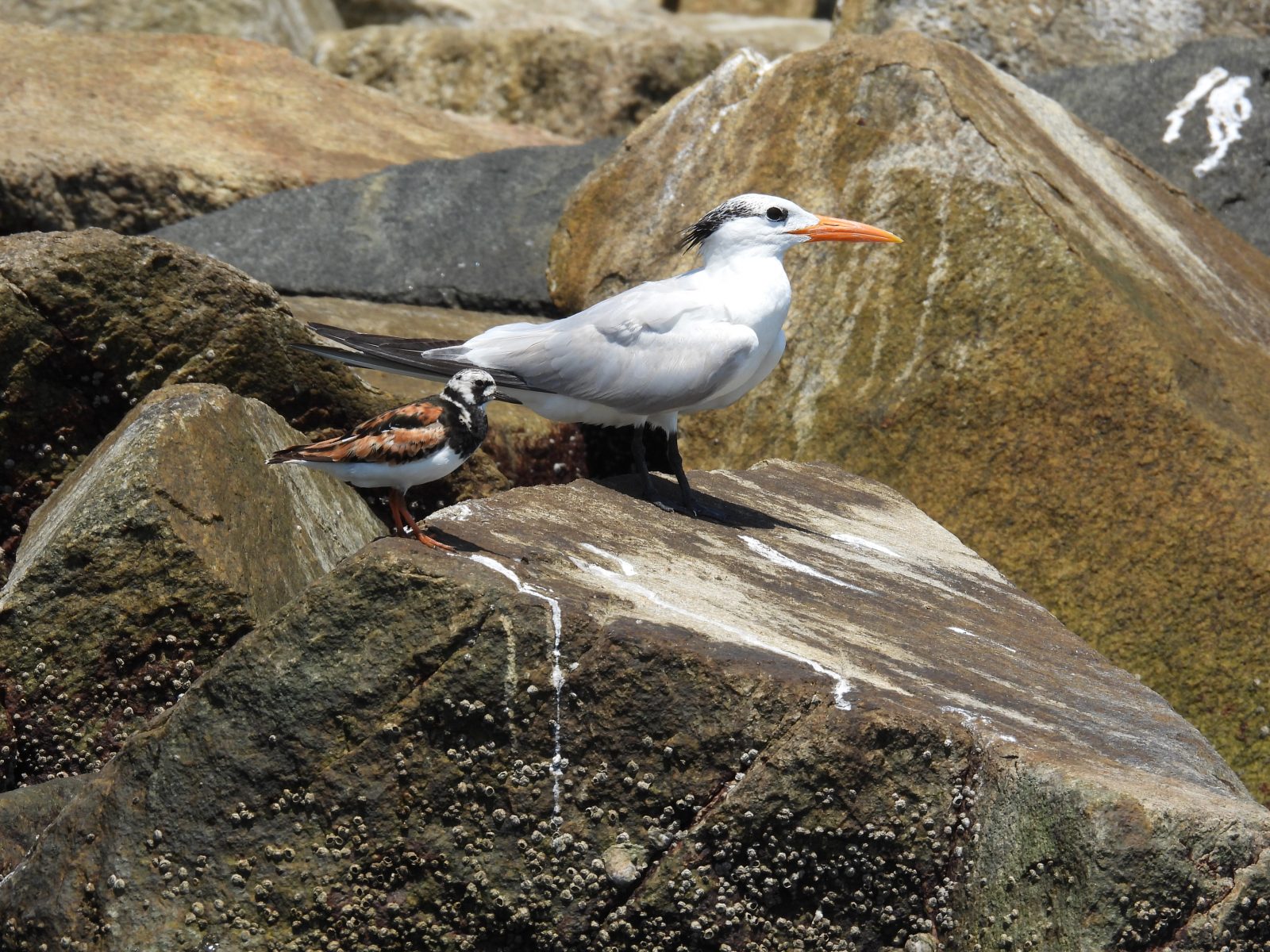 A royal tern and a ruddy turnstone share a perch amongst the Ft. Wool riprap.