Saugeye is a member of the perch family.  This species is a hybrid created by crossing a female walleye with a male sauger. Saugeye were first stocked in Virginia in 2013. 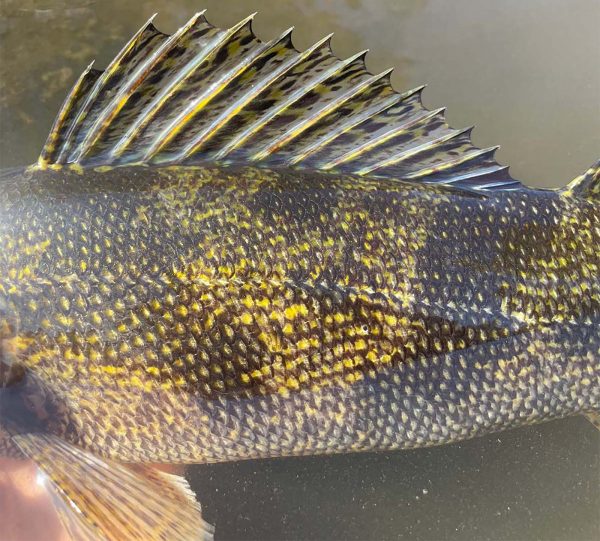 A close up of a saugeye dorsal fin. Note the distinct black streaks and spots along the base of the fin.

Saugeye have tannish yellow to gold-colored sides with distinct dark blotches or saddles extending from the dorsal to the ventral side of the fish. Like walleye, saugeye will have a distinct dark blotch on the rear base of the front dorsal fin. Sauger will not have this blotch.  Additionally, saugeye have lots of rough scales on their cheek while walleye and sauger only have a few cheek scales.  Walleye cheek scales are smooth while sauger cheek scales are rough.

Where can I find Saugeye in Virginia?

In 2013–2015, 2019, 2021 and 2022 saugeye were stocked into several walleye fisheries in place of walleye.  In some locations saugeye performed well and are now established in these waters and are desired by fisheries managers because of the hybrid vigor demonstrated.  In waters where saugeye are stocked they will be managed similar to walleye, treated as walleye in the regulatory process and included in the state’s walleye management plan. The following conditions will be met in order to stock and manage saugeye in Virginia waters. Saugeye will not be stocked into drainages or waters that have naturally reproducing walleye populations and/or waters that provide walleye brood stock for hatchery production. This will reduce the risk of back crosses occurring in systems that have natural reproduction and prevent unwanted crosses of saugeye and walleye made at hatcheries if saugeyes are mistaken for walleye during brood stock collections.

The production and stocking of saugeye into various waters within Virginia would not be made possible without the help of the West Virginia DNR and the hatchery staff at Apple Grove Fish Hatchery in Gallipolis, WV. The healthy population of sauger in the Ohio River serves as the annual brood source for hatchery operations. 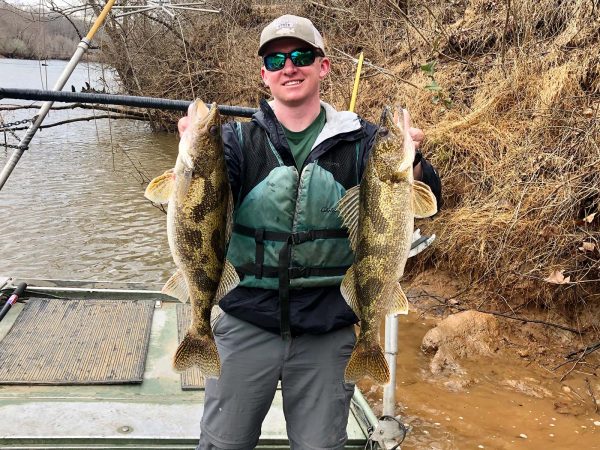 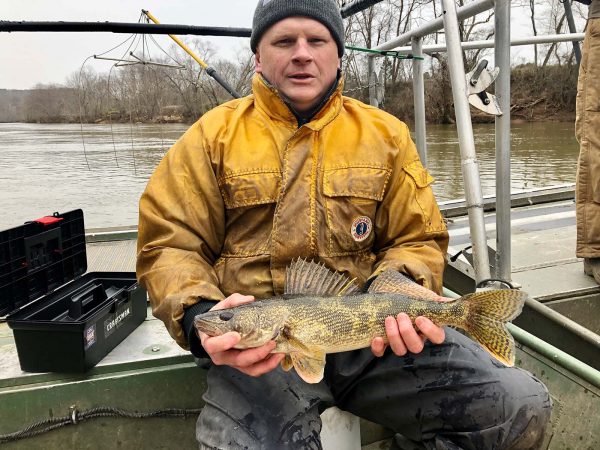 Nighttime electrofishing effort provides the required number of sauger to be collected and transferred back to the hatchery. Collected sauger are split into holding tanks based on their sex. The collected male sauger are milked of their milt with collected milt being extracted by a syringe. Milt is transferred to vials containing milt extender and then placed on ice overnight. Vials of milt are then delivered to Virginia and DWR’s Vic Thomas Hatchery, where hatchery staff fertilize eggs from Staunton River walleye to create the hybrid saugeye.

Similar techniques used to catch walleye will also prove to be productive on saugeye.  Additionally, saugeye can sometimes be less finicky than walleye.  Bright jig heads with soft plastic swimbaits work really well on rivers during the pre-spawn time frame in late winter/early spring. Crankbaits and jerkbaits will also prove productive in the right conditions. Anglers fishing with bait will have luck on nightcrawlers and live minnows.

Trolling is a popular tactic in the summer months if you can locate fish on flats above the thermocline in large impoundments and lake systems. Trolling anglers have success with night crawler harness rigs or crankbaits in these situations. Vertical jigging with swim baits and blade baits can also be a popular technique to catch both saugeye and walleye on lakes and reservoirs in Virginia. For anglers interested in catching saugeye or walleye with a fly rod, the best chance at success is during the spring by throwing streamer patterns on rivers during the pre-spawn time frame.

Like walleye, saugeye have a reflective layer of pigment in their eye that allows them to gather light in low light conditions. These fish often stay in deeper water during the day and move into shallower water at night, dawn, and dusk to feed. In tailwaters, you can find these fish in deep holes with cover and woody debris.

Saugeye feed on other fish, aquatic insects, and crustaceans like crayfish. Overcast, cloudy, and rainy days can be great for targeting both saugeye and walleye.

In general, saugeye can tolerate warmer water temperature regimes than walleye and can perform better than walleye in more productive and turbid systems. Saugeye can thrive in both rivers and lakes as long as they provide the right habitat. Impoundments that stratify in the summer months and provide ample cooler water habitat with oxygen will support saugeye populations.

As a hybrid, saugeye are purported to have reduced fecundity, however observations of Lake Anna fish suggest they produce viable gametes. Despite this, natural reproduction is highly unlikely due to habitat limitations in addition to biological and behavioral issues from hybridization.

In river systems, saugeye will migrate upriver during spawning season in a similar fashion to walleye and sauger. In tailwater systems, they can be found congregating below dams in late winter and early spring, going through the motions of the spawn.